“Coming out from Behind the Badge” 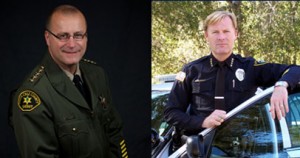 Jim Hart was sworn in as a deputy sheriff with the Santa Cruz County Sheriff’s Office on October 1, 1988.  After graduating from the police academy, Jim started working in patrol and then he was assigned to a variety of drug investigation teams in the early 1990’s.  Jim was promoted to sergeant in 1998 and he held positions as a patrol sergeant, detective sergeant and a community-policing sergeant.  He was promoted to lieutenant in 2006 and he managed the Patrol Division, the field-training program and he was the Investigation Division Commander for several years.  Jim was promoted to Chief Deputy in June, 2011.  As the Chief Deputy in Corrections, Jim was tasked with developing and implementing the Sheriff’s Office response to prison realignment.  The plan has proven to be effective and has won a number of awards and it is being used as a statewide model. Jim was elected to the Office of Sheriff-Coroner in the June, 2014 primary election and he took Office in January, 2015.  Jim was raised in Scotts Valley and graduated from Harbor High School.  He holds a Bachelor of Arts degree from the University of Nevada-Reno.  Jim has been an adjunct faculty member at Cabrillo College and Bethany University.  He was the head varsity girl’s basketball coach at Scotts Valley High School for eight years. Jim is married and has four children (Samantha 27, Elle 22, Nadene 18 and Noah 3) and he lives in Scotts Valley.

Chief John P. Weiss has been with the Scotts Valley Police Department since 1990. He has served as a patrol officer, detective, sergeant and Lieutenant. He was appointed to Chief of Police in 2006.

Chief Weiss holds a Master’s degree in Criminal Justice Administration and strongly supports a community-policing model in Scotts Valley. He is married and has a teenage son. To learn more about Chief Weiss visit his personal blog at www.johnpatrickweiss.com.

You Have A Home In PFLAG

Parents, Families and Friends of Lesbians and Gays (PFLAG) of Santa Cruz County meets the second Tuesday of every month from 7-9 pm at Peace United Church of Christ (formerly First Congregational Church of Santa Cruz) at 900 High Street in Santa Cruz. Contact us at pflagscc@gmail.com, www.pflagscc.org or call (831) 427-4016.

You Have a Home in PFLAG
Parents, Families and Friends of Lesbians and Gays (PFLAG) is the nation’s foremost family-based organization committed to the civil rights of gays, lesbians, bisexual and transgender persons. Founded in 1973 by mothers and fathers, PFLAG has 200,000 members and supporters in more than 500 chapters throughout the United States. To learn more, please visit www.pflag.org.